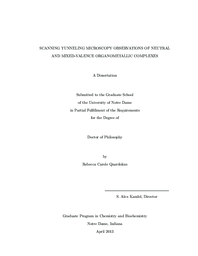 Low-temperature ultra-high-vacuum scanning tunneling microscopy (STM) is used to study di- and trinuclear iron-based organometallic molecules. Chemical oxidation of these molecules leads to mixed-valence species with interesting intramolecular charge-transfer properties. STM images of neutral molecules show symmetrical distribution of electron density across the metal centers because the metal centers are present in the same oxidation state. STM images of mixed-valence molecules show an asymmetric distribution of the electron density, indicating that the metal centers are present in diﬀerent oxidation states. I have found that the intramolecular charge-transfer rates depend on the geometry of the organic linker between the metal centers, and that these mixed-valence compounds retain their electronic properties when placed on a metal surface in the absence of bulk solvent. Comparison with theoretical STM images derived from constrained-density-functional theory (CDFT) calculations leads to the conclusion that the observed features in the STM images are electronic in nature. Investigation of mixed-valence dinuclear organometallic molecules with asymmetric electron state density may open up the possibility for their use in molecularly based electronic devices.