Coming of Age in Post-Accord Belfast: Changes in the Political Climate and Exposure to Sectarian Violence as Moderators of Adolescents' Emotional Security 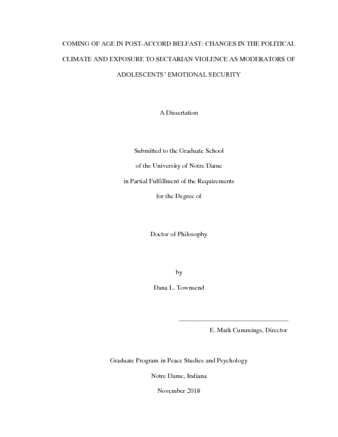 Growing up in a post-accord society characterized by ongoing intergroup tension and cyclical violence such as Northern Ireland may put youth at a higher risk for psychopathology. Prior research in Belfast showed that increased exposure to sectarian violence often resulted in more emotional insecurity about the community and subsequent adjustment problems. Though the impact of direct exposure to violence is well documented, few studies account for factors outside of one’s immediate environment – such as the broader sociopolitical climate and the levels of tension or threat in society. The current study advances research in this area by using systematically coded newspapers from Northern Ireland (N = 2,797) to assess the overarching trends in Catholic-Protestant relations from 2006-2011 and explore the relation between these macro-contextual changes and adolescents’ emotional insecurity. A qualitative analysis of the news reports showed that, despite progress in the peace process during these years, intergroup conflict was prevalent. At the societal level, political tension and intragroup threat were characterized by sectarian community violence, lack of trust in the police, and a spike in dissident republican attacks. A series of multilevel moderation analyses using the coded news reports and five waves of survey data from families in Belfast (N = 999) indicated that adolescents responded differently to community violence depending on the political climate. Overall, emotional insecurity increased with exposure to sectarian violence. During periods of high intragroup threat in society, this relation was stronger for Protestants and weaker for Catholics. As macro-level threat increased, Catholics who had more cumulative exposure to violence became more secure, Catholics who had less cumulative exposure became more insecure, and Protestants who had more cumulative exposure remained more insecure than their peers. During periods of high intergroup tension in society, adolescents with more cumulative exposure to violence became more secure, regardless of their group. These findings illustrate how individual responses to the immediate environment can vary based on salient events in society, thus contributing both empirically and methodologically to the design of interventions and policies in Belfast and other areas affected by violent conflict.