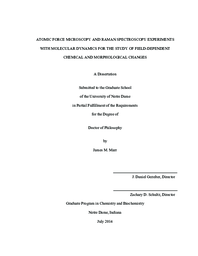 This dissertation focuses on coupling experimental applications with molecular dynamics simulations to investigate the effects of applied electric fields on systems susceptible to them. Experimentally, this work is on the application of Raman enhancement techniques with atomic force microscopy (AFM) and microano electrode environments. More specifically, tip enhanced Raman scattering (TERS) was used to obtain high spatial resolution spectral information at interfaces. On the computational side, static electric fields were simulated in atomistic and coarse-grained simulations. The primary focus of the development was to model systems that could be correlated to the experimental work for a deeper understanding of the experimental results.

Electrostatic Effects of Ca2+ on Lipid Vesicle Stability
The divalent cation, Ca2+ is known to cause instability in unilaminar lipid vesicles composed of dipalmitoylphosphatidylserine (DPPS), while dipalmitoylphosphatidylserine (DPPC) vesicles remain mostly unchanged. Through the use of laser transmission spectroscopy (LTS), Ca2+ induced rupture and fusion of DPPS vesicles was monitored. LTS has improved size resolution, relative to dynamic light scattering, enabling highly accurate sizing of the vesicles before and after Ca2+ addition. Ca2+ promotes DPPS vesicle fusion to a maximum vesicle size of approximately 320 nm, while only a slight osmotic swelling was observed with DPPC vesicles. A free energy model was derived to explain the energy of the maximum vesicle size observed. It was found that at 320 nm, the energy penalty for DPPS is much larger than that of DPPC, leading to rupture. The formation of lipid bilayers at the bottom of the solution was verified by AFM experiments.

Plasmonic Stark Effect
Shifts in the observed cyanide (CN) stretch frequency at the surface of fabricated micro-electrodes and the resulting SERS activity were investigated to correlate an apparent Stark tuning within plasmonic fields. Cyanide was co-deposited on the electrodes as a result of the gold plating process. As the electrodes became rougher and displayed more SERS activity, the cyanide peak at 2250 cm-1 shifted to the blue. This was directly correlated with SERS activity from a common reporter, thiophenol. This effect was further explored through a controlled formation of a plasmonic gap junction between a nanoparticle TERS tip and the deposited gold surface. The plasmonic field in the gap junction resulted in a 129 cm-1 blue shift in the CN stretch frequency.

Isotropic-Nematic Phase Effects on the CN Peak of 5CB
This project dealt with understanding the local environment of a liquid crystal through a nitrile reporter in the molelcular structure. Compuationally, this was done with molecular simulations of condensed-phase 5CB with applied external fields. As the field strength was increased, the system underwent an isotropic to nematic phase transition. This phase change was accompanied by a red shift of ~2.3 cm-1 in the CN peak position. Ab intio calculations were performed, showing a similar effect with a red shift of ~2.5 cm-1. We suggest that the shift is caused by an anti-caging effect when the molecule is in the nematic phase.

Effect of Nano-confined Electric Field on Water
Water was used as an initial test of applied fields with strengths on the order of those achievable in the experimental scheme. These simulations were used to investigate structure (eg. g®) and dynamic properties (eg. rotational diffusion) of liquid water. These data were combined with Raman mapping parameters developed by the Skinner group to study the effect of electric fields on the Raman spectrum. It was found that electric fields have very little effect on liquid water because the internal fields in liquid water are orders of magnitude larger than static fields that can be applied experimentally. The data showed frequency distributions were largely unchanged as a function of applied field.