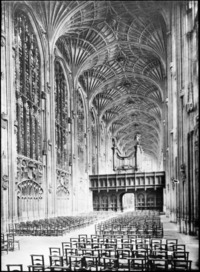 King’s College (King’s College of Our Lady and St. Nicholas in Cambridge) was the second royal foundation in Cambridge, inaugurated by Henry VI in 1441. The chapel, dedicated to SS Mary and Nicholas, built from 1448 to 1515, is the only surviving part of the second building plan begun 1448. The chapel is an aisleless limestone building ca. 90 m long and 30 m to the crown of the vault. It is divided internally into choir and antechapel. The first campaign, under Reginald of Ely, was hampered by lack of funds and by the civil war from 1455. In the rapid Tudor building campaign the antechapel and fan vault were constructed by John Wastell; the style is related to contemporary royal work but is more restrained. Those bays completed before 1485 were altered to accommodate the existing fan vault.