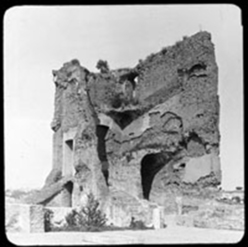 A large Roman archaeological complex at Tivoli, Italy. The villa was constructed at Tibur (modern-day Tivoli) as a retreat from Rome for Roman Emperor Hadrian during the second and third decades of the 2nd century AD. Hadrian is said to have disliked the palace on the Palatine Hill in Rome, leading to the construction of the retreat. Hadrian’s Villa is a vast area of land with many pools, baths, fountains and classical Greek and Roman architecture set in what would have been a mixture of landscaped gardens, wilderness areas and cultivated farmlands