Development, Verification and Usage of a Model for the Primary Vector for Malaria 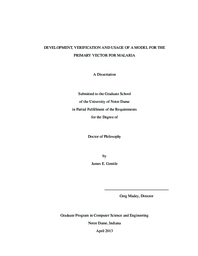 There is renewed interest in global malaria elimination but this task likely requires new technologies, information, drugs, interventions and a better understanding of the systems involved in malaria transmission. Modeling and simulation can help to evaluate the potential effectiveness of various control strategies and expose new ways to interrupt disease transmission. However, there is not a rich, widely publicized model that captures the mosquito vector’s life-stage and behavior.

This work introduces an agent-based model for Anopheles gambiae, the primary vector in sub-Saharan Africa. With this model, researchers can simulate a mosquito population, subject it to various intervention pressures, evaluate its response and its capability to transmit the disease. In so doing, the researcher can observe the emergent effects of the intervention and better understand how mosquitoes spread the illness. This dissertation addresses several engineering and scientific challenges involved in the mode’s development and deployment. First, a software architecture is presented that is capable of richly expressing various life-stage and behavior attributes of the mosquito in an agent-based simulation. Second, our implementation is shown to verify with the core model through a novel set of procedures that quantitatively compare some emergent properties of the simulation with expected values from the core model. Next, the implemented model is trained and cross validated using various trap collections from northern Nigeria. Finally, the model is used to investigate a newer form of mosquito interventions known as sterile insect technique (SIT). SIT generally consists of the release of males sterilized through transgenic, chemical, or radiologic means into a wild population. When females mate with these males, their progeny’s development is affected. We are the first to model four lethal transgenes on a population of Anopeheles gambiae with agent-based methods and report on their effects. Our results expose an insight that has not yet been demonstrated in the literature.