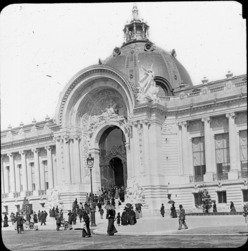 The tympanum depicting the city of Paris surrounded by muses is the work of sculptor Jean Antoine Injalbert.

Girault had done temporary structures for Exposition Universelle, Paris, of 1889 and of 1900. He also erected two structures that were intended to outlast the 1900 exhibition: the Petit Palais, which was entirely his own work, and the Grand Palais, of which he was principal architect. The façades are interpretations of 18th-century French architecture and the Petit Palais in particular is an obvious allusion to the stables of the château at Chantilly, which were built (1721-1735) by Jean Aubert and restored by Daumet in the late 19th century. The Petit Palais, which was intended to accommodate collections of historic French art at the Exposition Universelle and then to become a museum, is arranged around a central courtyard, with an entrance hall and two vast galleries with sumptuous paved floors.