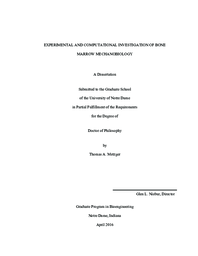 Bone is a metabolically active tissue that undergoes constant repair and remodeling, depending on its biochemical and biomechanical environment. Bone metabolism is partially controlled by mechanical cues, with higher loads causing net bone accretion and lower loads fostering bone loss via cell signaling. While the osteocyte is considered the primary mechanosensory cell in bone, the bone marrow provides a niche for a multitude of mechanosensitive cell types that may also play a role in maintaining bone health and bone marrow health and physiology. The characterization of trabecular bone marrow mechanics during whole bone loading has been difficult due to its location, surrounded by cortical bone or within the complex geometry of trabecular bone which has limited our understanding of the role of bone marrow mechanobiology.

The goal of this dissertation research was to establish methods to assess the micromechanical environment of trabecular bone marrow and to apply these methods to investigate changes in bone marrow mechanobiology in disease.

To assess the mechanical environment of the bone marrow during whole bone loading, bone marrow pressure was measured experimentally. Six fresh porcine femora were loaded cyclically while pressure and load were monitored. The marrow pressure reached 5 kPa, and the pressure gradients reached 0.46 kPa/mm. Experimental pressure gradients were applied to microscale models. The models found that the shear stress within the marrow pore space in the range of 2 Pa. The potential to generate these levels of pressure gradients and shear stress was further verified by novel high-resolution fluid-structure interaction finite element simulations. The models showed that the pressure gradients measured during loading were consistent with fluid-structure interaction simulations, based on measured marrow properties. Simulations further illustrated that increased strain rate, bone marrow viscosity, and BV/TV increase the pressure and shear stress within the bone marrow. In order to investigate how the calculated marrow shear stress is translated to the cell level, multi-scale models were applied. At the cell-level, the marrow shear stress was amplified by 4 times due to localized cell adhesion. However, this effect was attenuated as the adipocyte content in the marrow increased. Finally, in the conclusion of this work, experimental and computational studies seek to further elucidate the role of marrow mechanobiology on de novo bone formation in vivo.