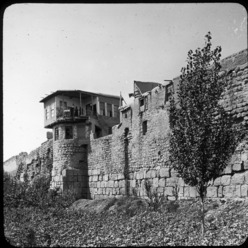 In Paul’s time, the city of Damascus was surrounded by a wall pierced by seven gates. Bab Kisan is the gate on the southeastern side of Damascus and was dedicated to Saturn. It seems reasonable that the Bab Kisan was the gate through which Paul escaped. This southeastern district of the city was not only very close to the start of the Roman road that St. Paul would have taken, but was also the part where, from the earliest times, the Christians used to live. Early Christian tradition identified a window beside the Kisan Gate, as the window from which St. Paul was lowered. In 1885, old and ruined, it was purchased together with the surrounding area by the Melkite Patriarch Gregory Joseph. On this land a chapel was erected, whose walls incorporate traces of the ancient gate and a small section of the wall. It was inaugurated in 1939.