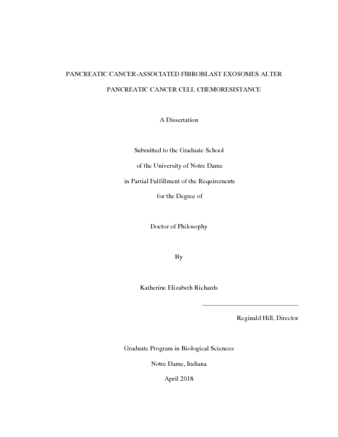 Pancreatic cancer adenocarcinoma (PDAC) is currently the third leading cause of cancer related death in the United States with a 5-year survival rate below 9%.Even though the poor prognosis of PDAC is often attributed to late diagnosis, patients with early diagnosis who undergo tumor resection and adjuvant chemotherapy usually show tumor recurrence, highlighting a need to develop therapies which will overcome chemoresistance.Many studies relate chemoresistance to the prominence of cancer associated fibroblasts (CAFs) which comprise the majority of the tumor bulk.Despite the long-standing recognition of the prominence of CAFs in PDAC, the effect of chemotherapy on CAFs and how they mechanistically contribute to drug resistance in neighboring cancer cells is not well characterized.The goal of this research was to explore the effect of CAF-secreted extracellular vesicles, called exosomes, on the phenotypic traits of PDAC cells.We show that CAFs exposed to chemotherapy play an active role in regulating the survival and proliferation of cancer cells.CAFs are intrinsically resistant to gemcitabine, the chemotherapeutic standard of care for PDAC.Further, CAFs exposed to gemcitabine significantly increase the release of exosomes, which promote proliferation and chemoresistance of recipient PDAC epithelial cells. Mechanistically, these exosomes increased chemoresistance-inducing factor, Snail, in recipient epithelial cells as well as PTEN-targeting microRNAs.Blocking exosome release from CAFs in vitro significantly reduces survival of co-cultured epithelial cells, and exosome blockade in vivo reduced tumor growth during gemcitabine treatment, signifying an important role of CAF exosomes in chemotherapeutic drug resistance.Collectively, these findings show the potential for exosome inhibitors as treatment options alongside chemotherapy for overcoming PDAC chemoresistance.