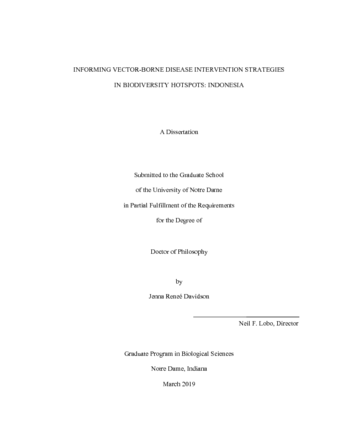 Over the past few decades, global changes have resulted in the re-emergence of vector-borne diseases (VBDs), including but not limited to, malaria, dengue fever, and Zika in many parts of the world, inflicting high morbidity and mortality at a disproportionate level, especially in the developing world. Furthermore, the incidence of VBDs is increasing. Dengue fever, for example, has increased 30-fold over the past 50 years, and its human and economic costs are staggering. VBDs alone amount to a loss of approximately 83.5 million disability-adjusted life-years (DALYs) in 1990 and increasing to approximately 94.5 million DALYs in 2010, severely slowing economic growth in endemic regions.

Indonesia’s Malaria Control Program, decreed by the Ministry of Health in 2009, declared a national commitment to eliminate malaria by 2030. From the centralized, national level, the Ministry of Health produces a general framework in the form of recommendations, standards, and goals based on generalized WHO recommendations for elimination efforts. However, the decree also established a commitment to the principles of decentralization, making Indonesia one of four countries in the Southeast Asian region with a subnational elimination strategy alongside India, Myanmar, and Thailand. Therefore, outside of recommendations and strategies provided at the centralized level, control and surveillance efforts are delegated to the provinces and ultimately to districts and local stakeholders. Not surprisingly, this results in widely variable strategy efficacy throughout the nation. To some extent, this is wise, as Indonesia is a highly biodiverse archipelago with complex species dynamics, bionomics, and human behaviors that may confound efforts to over-centralize such efforts. However, due to the lack of reporting mechanisms, comprehensively summarizing and evaluating efforts to reduce the disease burden in Indonesia a difficult task, as data regarding control method administration and effectiveness are not always tracked and reported by local stakeholders with little to no centralized incentive to follow through in that manner. Furthermore, there are no goals or recommendations set by the Ministry of Health in regard to mosquito surveillance for species compositions and bionomic information.

Vector control strategies require detailed knowledge of the identity, distribution, and bionomics of the primary disease vectors within the target region. Due to Indonesia’s current practices in mosquito surveillance, species identification, and bionomics determination, little is known about disease circulating mosquito vectors present in Indonesia. This dissertation attempts to fill this knowledge gap by providing much needed information regarding Indonesia’s mosquito disease vectors’ identity, distribution, and bionomics, as well as to propose a new strategy to improve vector control program efficacy in the country. The Indonesian Ministry of Health’s current recommendations to provincial governments currently lacks any goal or requirement towards determine this information. Therefore, as a Null hypothesis, this research will consider that: standard practices for mosquito surveillance, identification, and bionomics determination effectively inform vector-borne disease intervention strategies in biodiversity hotspots: Indonesia.

For objective one, to evaluate standard practices for mosquito surveillance in their ability to comprehensively survey local mosquito species compositions in biodiversity hotspots, this dissertation found that indoor HLCs and larval surveys are insufficient sampling regimens. Furthermore, net traps were demonstrated to have distinct advantages toward characterizing mosquito compositions due to their ability to passively sample free-flying mosquitoes regardless of host preferences. Meanwhile, the Host Decoy Trap is a valuable and ethical free measure of host-preferential behaviors, especially for Culex mosquitoes, that doesn’t put collectors at risk of arboviral transmission. Further studies involving the manipulation of HDT stimuli could improve its use for other genera in the region.

For objective two, to evaluate trapping methodologies for mosquito surveillance in their ability to characterize mosquito bionomics in biodiversity hotspots, this dissertation demonstrated that indoor HLCs and larval survey are insufficient for informing intervention strategies, especially because bionomics may be targeted by interventions to reduce disease transmission. The variety of methods utilized in this study, including the kelambu trap, barrier screen with eaves, barrier screen, host decoy trap, and indoor and outdoor HLCs, all demonstrated different biases for targeting and evaluating bionomic characteristics of mosquitoes. Behavioral implications of preferential biting locations, mosquito focal points, flight direction, and host preferences, which are not properly evaluated by indoor HLCs and larval surveys alone, can all be targeted downstream by intervention strategies, many of which were suggested within each chapter.

As demonstrated in this research, ethical and accurate characterization of species compositions and bionomics requires the use of trapping methodologies that take advantage of a variety of behavioral traits and molecular identification. Based on the research in this dissertation, performing local baseline collections utilizing different trapping methodologies that target a variety of mosquito behaviors is recommended. Net traps can be utilized to target free-flying mosquitoes and HDTs when the collection of culicines is desired. Molecular identification should be performed on all specimens to create a baseline species and genetic database within the country. Figure 7.1 shows provides an example of a molecular system. It is recommended that an initial survey of mosquito species in a region to have both morphological and molecular identification done to create baseline data for species-specific identification accuracy. After this initial survey, future identifications in the region could use the baseline data to determine which species would be necessary to identify molecularly. For example, if species A was correctly identified 98% of the time with morphological identification, it would likely be unnecessary to use valuable time and resources verifying all samples molecularly. However, if species B was never identified correctly, then it would be recommended that the misidentified species type be molecularly identified, since it’s likely species B. Future researchers will have to use prudent judgement while determining which subset of mosquitoes to molecularly identify based on the baseline data regarding morphological accuracy. Furthermore, determining which specimens are being incorrectly identified with morphology can inform researchers on which field technicians may need more morphological training to improve accuracy. Additionally, if baseline molecular identification is performed, it can inform on which species are possible members of cryptic species complexes, sibling species, and possible new or novel species. If cryptic species are found than all future specimens would require molecular identification. After local baseline data is collected and molecularly identified, continued monitoring in local regions to identify changes in vector populations, determine intervention efficacy, and identify where residual transmission is causing gaps in protections will be necessary. With this system, local interventions can be implemented to target local vector population bionomics. Since monitoring would be ongoing, interventions could be adapted appropriately in response to changes in vector populations.