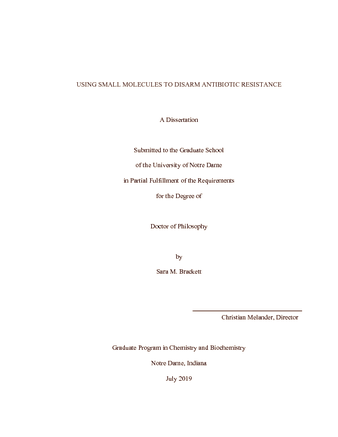 In 2016, the World Health Organization deemed antibiotic resistance one of the biggest threats to global health, food security, and development. Despite growing antibiotic resistance, pharmaceutical companies continue to divest from antibacterial research. This has led to the need for new approaches to identify effective therapeutic strategies. One approach is the identification of small molecule adjuvants that potentiate the activity of antibiotics of demonstrated utility, whose efficacy is abated by resistance, both acquired and intrinsic. Antibiotic adjuvants are compounds that possess limited or no antimicrobial activity alone, but enhance the activity of an antibiotic when delivered in combination.

This work describes a structure activity relationship (SAR) study based on a lead compound that has previously displayed biofilm inhibition and dispersion activity and β-lactam potentiation against Mycobacterium tuberculosis. The activity of the lead compound is linked to the disruption of mycobacterial cell envelope lipid synthesis and disruption of proton motive force. The SAR study led to the identification of a more potent adjuvant and revealed that antibiofilm activity is decoupled from β-lactam potentiation activity against Mycobacterium smegmatis.

Additionally, this work outlines another SAR study performed against M. smegmatis using the natural product meridianin D as the lead compound. This SAR study revealed that the meridianin D analogues lack β-lactam potentiation capabilities, but replacing the 2-aminopyrimidine moiety attached to the indole with a 2-aminoimidazole group led to enhanced biofilm inhibition and dispersion activity. Varying the halogen on the indole also modified activity.

This work also describes a project focused on sensitizing Gram-negative bacteria to Gram-positive selective antibiotics by the use of antibiotic adjuvants. Compounds have been identified that enhance the efficacy of antibiotics normally ineffective against Gram-negative pathogens because of the outer membrane permeability barrier. We identified two adjuvant compounds that dramatically enhance sensitivity of Acinetobacter baumanniito macrolide and glycopeptide antibiotics with reductions in minimal inhibitory growth concentrations as high as 256-fold, and activity observed across a variety of clinical isolates. Mode of action studies indicate that these adjuvants likely work by modulating lipopolysaccharide synthesis or assembly. The adjuvants were active in vivo in a Galleria mellonellainfection model, indicating potential for use in mammalian infections.