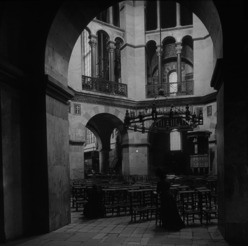 The current, resplendent interior decoration is not Carolingian but the result of a radical restoration carried out ca. 1900 after late Baroque stucco had been stripped from the walls. It seems clear, nonetheless, that the walls were originally covered with rich marble revetment and the dome with mosaic. Hanging from the vault in the center is Barbarossa’s Chandelier, a huge (4.2-meter diameter) bronze circlet commissioned by Frederick Barbarossa to celebrate Charlemagne’s canonization. It was created in 1165-1184 in Aachen.