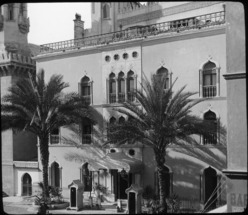 Dar Hassan Pacha is an 18th-century palace located in the Casbah of Algiers, Algeria. It was built in 1791 and used to belong to Hassan III Pasha. After 1830, it became the winter residence of the Governor of Algiers, and as a consequence, it was completely remodelled in 1839, when the entrance was changed and a new façade was created.