Palace of the Spanish Viceroy: Raking view of the facade facing the central plaza and park 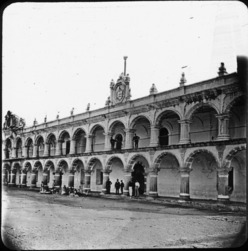 Antigua Guatemala (commonly referred to as just Antigua or la Antigua) is a city in the central highlands of Guatemala famous for its well-preserved Spanish Mudéjar-influenced Baroque architecture as well as a number of spectacular ruins of colonial churches. It has been designated a UNESCO World Heritage Site. For 200 years, the Palacio was the home of the Spanish viceroy, making it the seat of power for all of Central America. The original building, modified many times over the centuries, was constructed in the late 1500s and held the court of law, provincial offices, post office, treasury, royal office, servants’ quarters, and horse stables within its more than 20,000 sq. m (215,000 sq. ft.).