State Hermitage: Southern facade of the New Hermitage, with portico with atlantids 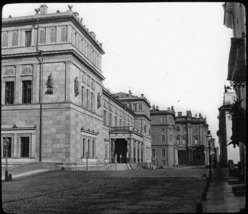 Lantern slide labeled Petrograd. The New Hermitage Museum is by Leo von Klenze (built 1842-1851) in a neoclassic style. Until the 1920s the museum’s entrance was under the portico supported by five-metre high atlantes of grey Serdobol granite from Finland in the middle of the southern facade of the New Hermitage building.