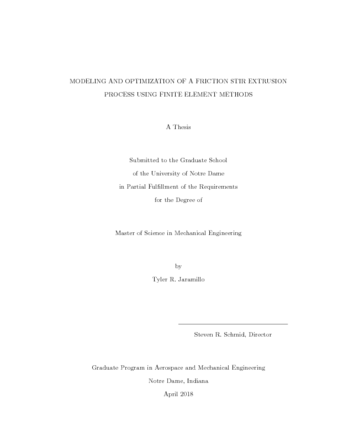 Friction stir extrusion (FSE) is a relatively new manufacturing process that allows for reduced cost production of metallic piping with a fine, equiaxed grain structure. While some research has been conducted into computational modeling of varying FSE techniques, little has been done in terms of creating models to predict process parameter requirements, such as extrusion force or mandrel torque. To that end, models of a sample FSE process for the extrusion of 6061 aluminum were created in the commercial finite element analysis software DEFORM. The models were validated by two means. First, simple die geometries were analyzed using upper and lower bound methods. The same geometry was simulated in DEFORM and the results compared. Second, the sample FSE process was modeled and compared to physical trials. Once the computational model was validated, various process variants were modeled to optimize the technique subject to machine constraints.