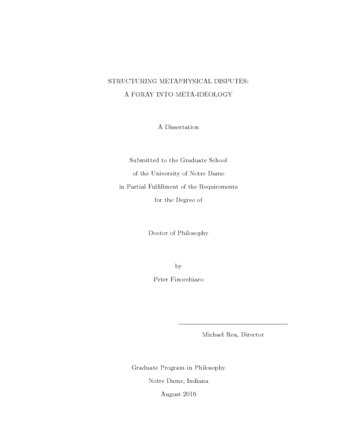 This dissertation is an attempt to get clear on the philosophical implications of a theory’s ideology, especially as it pertains to metaphysics. Roughly speaking, the dissertation can be divided into thirds. In the first third, I provide a preliminary characterization of ideology and in so doing distinguish the multiple ways metaphysicians conceive of ideology. My primary focus is on the differences between what I call ideological externalism and ideological internalism. Ideological externalism is the view on which the quality of a theory’s ideology is evaluated by the extent to which the ideology corresponds to the objective features of the world. Ideological internalism, in contrast, is the view on which the quality of a theory’s ideology is evaluated by how it relates to the theoretical process. In the second third of the dissertation, I argue for a particular version of ideological externalism, what I call non-ontic maximal realism. According to this position, we ought to endorse theories that employ ideology we have reason to believe correspond to the objective features of the world, where these features can be things (e.g. electrons or properties) or non-ontic stuff (e.g. water and quantificational structure). In arguing for maximal realism, I defends both its intelligibility and its viability relative to its competitors. In the final third of the dissertation, I make some methodological suggestions for those who endorse maximal realism. Given that maximal realism is true, how do we go about determining which theories employ the correct ideology? I advocate for a modified version of the virtue-driven methodology. According to this methodology, the fact that a theory exhibits some theoretical virtue is a reason to believe that it employs the correct ideology. (In the appendix, I suggest that the standard story regarding ideology is historically inaccurate. Quine was not the first to distinguish between a theory’s ontology and its ideology. In fact, the distinction can be found in the earliest figures in analytic philosophy. I illustrate this by discussing Russell’s lectures on logical atomism.)