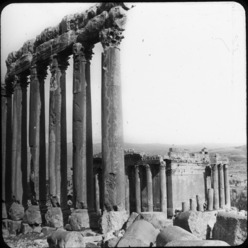 The original number of Jupiter columns was 54 columns. In the early 20th century an earthquake reduced the 9 remaining columns to six. The architrave and frieze blocks weigh up to 60 tons each, and one corner block over 100 tons, all of them raised to a height of ca. 19.9 m above the ground.