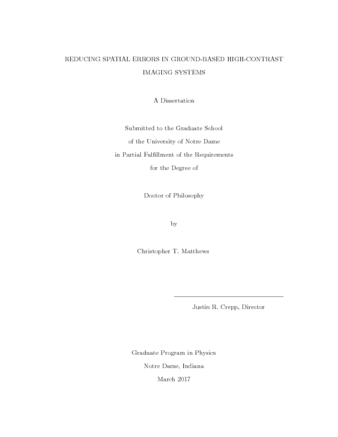 Scattered starlight limits the ability of high-contrast instruments to directly image extrasolar planets and other faint companions orbiting nearby stars. Several ground-based facilities have developed integral field spectrographs to perform point-spread function subtraction using software post-processing while simultaneously acquiring low-resolution spectra of the sub-stellar companions they discover. However, spectroscopic images (nominally in the form of a data cube) may also be used to improve wavefront correction at low temporal bandwidth. This Ph.D. thesis focuses on enhancing the performance of high-contrast adaptive optics systems by taking advantage of the readily available information provided by an integral field spectrograph. Focal plane measurements from the science detector can be used to sense and correct for wavefront non-common-path (NCP) errors introduced by imperfections in the optical system.

This thesis accomplishes the following objectives. An existing focal plane wavefront sensing algorithm, called “Electric Field Conjugation” (EFC), which has previously only been tested in the lab, is used to sense and then correct quasi-static phase and amplitude errors with an advanced ground-based coronagraph at Palomar observatory, the Project 1640 (P1640) coronagraph and hyperspectral imager. The baseline EFC algorithm has been developed and adapted for monochromatic applications with this instrument. This algorithm is carefully examined through numerical simulations, and then through whitelight experiments using P1640 in the adaptive optics (AO) lab at Palomar. We show in this thesis that despite the practical complications introduced in moving EFC from the lab to the telescope setting, our EFC implementation is capable of providing an improvement in the contrast achieved in whitelight experiments. This result is the first step in the ultimate goal of developing and fully implementing a robust and efficient procedure to remove scattered starlight introduced by NCP spatial errors in P1640 and other high contrast imaging instruments.