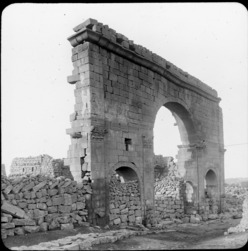 After being annexed by the emperor Trajan in AD 106 Bosra (ancient Bostra) became the capital city of the Roman province of Arabia; most of its ancient remains date from this period. The Roman decumanus (main road), which runs from east to west is lined by Roman buildings from the 2nd century AD, including gateways to the west and east, a tetrapylon, and a monumental triumphal arch.