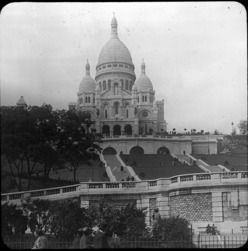 Showing entire building facade and steps up the the summit. [The Sacré-Coeur Basilica is a Roman Catholic basilica and popular landmark in Paris, France, dedicated to the Sacred Heart of Jesus. The basilica is located at the summit of the butte Montmartre (Montmartre butte), the highest point in the city.] One of the more exotic variants on the Basilican form is Paul Abadie’s design for the Sacré-Coeur (1875-1919), Paris, which has a Greek-cross plan expressed in a Byzantine Revival style.