Château de Chaumont: Side facade, view looking out over the river Loire 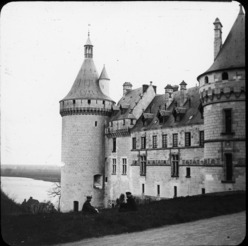 The main entry portal is to the right; the visible tower is the left side of the portal.

The Château de Chaumont was built by Eudes II, Count of Blois, in the 10th century with the purpose of serving as a fortress to protect the Blois from attacks. The castle was burned to the ground in 1465 in accordance with Louis XI’s orders and was later rebuilt by Charles I d'Amboise from 1465-1475 and then finished by his son, Charles II d'Amboise de Chaumont from 1498-1510. Château Chaumont was later purchased by Catherine de Medici in 1560. She forced Diane de Poitiers, Henry II’s long-term mistress, to exchange Château de Chenonceau for Château de Chaumont. Diane de Poitiers only lived there for a short while. Madame de Stael later acquired the Castle in 1810.