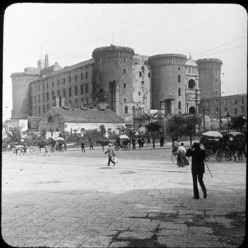 The early Renaissance triumphal arch entry is visible on the facade to the right, erected between 1453 and 1467 in honor of the entry of Alfonso I of Aragon.

The fortified residence was built in 1281 by the architects Pierre de Chaule and Pierre d'Agincourt for Charles I of Anjou (reigned 1266-1285), who elevated Naples to the status of capital of the Kingdom of Sicily and Naples. Maschio Angioino translates as the Angevin Keep. The site combined proximity to the city with direct access to the sea. The original structure must have resembled contemporary French castles in Provence, which were characterized by extremely high towers and walls crowned with crenellations, embrasures, a moat and all the other defensive devices of the period. Total remodelling during the 15th century retained only the basic square plan around a large central courtyard; the chapel of St Barbara, or Palatine Chapel, is the only surviving part of the original castle. Constructed in the Gothic style under the supervision of Giovanni Caracciolo and Gualtiero Seripando, it was decorated throughout with frescoes by Giotto and Maso di Banco, but this work had already been destroyed by the mid-15th century. The sculpture of the triumphal arch built in marble to celebrate and immortalize Alfonso’s triumphal entry into Naples (26 Feb 1443) was executed by at least nine different artists, including Domenico Gagini, Isaia da Pisa and Paolo Romano, and their numerous assistants. The design of the arch itself has been attributed to Pietro di Martino da Milano. Francesco di Giorgio Martin redesigned the outer defences of the castle in 1494.