Bringing War Back In: Victory and State Formation in Nineteenth Century Latin America 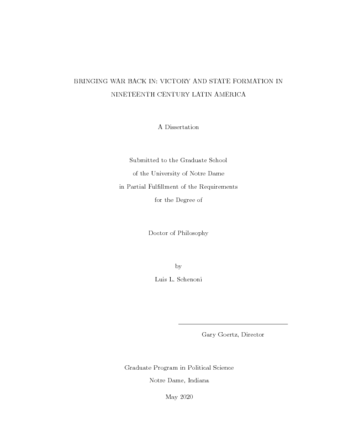 Scholars have often dismissed the effect of war on state formation in regions like Latin America where mobilization for war is deemed insufficiently intense and international conflict fails to out-select weaker states. Against this conventional wisdom, this dissertation contends wars can affect state building trajectories in a post-war period through the different state institutions that result from victory and defeat. The dissertation is divided in four parts. In a first part, it reconsiders the role played by war outcomes in classical bellicist theory and explores the concepts of war and state capacity in nineteenth-century Europe and Latin America. In a second part, it develops a multi-method strategy to test this claim by combining qualitative comparative analyses of state capacity at the year 1900 with difference-in-differences analyses and the synthetic control method, two estimators that identify the effect of losing vis-à-vis winning a war on levels of state capacity in a panel of Latin America (1865-1913). In a third part, causal mechanisms are illustrated in case studies of the Paraguayan War (1864-1870) and the War of the Pacific (1879-1883). Finally, a fourth part explores generalization to other Latin American cases and beyond.