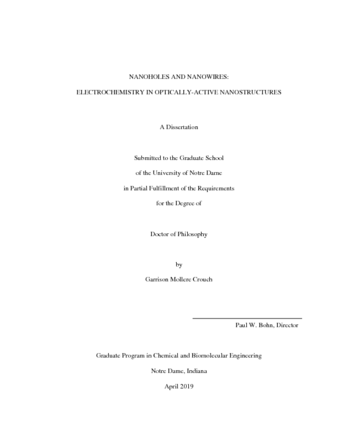 Closely-spaced nanoaperatures behave not as individual e-ZMWs but in aggregate as a plasmonic metamaterial, selectively transmitting light as a function of pore spacing and geometry. Electrodeposition of a dissimilar metal onto the conductive nanohole film, acting an electrode, creates a metamaterial with a tunable optical response proportional to charge transfer by decreasing hole size. Used as a reporter in a closed-bipolar electrode configuration, detection of analyte in a separate electrochemically-coupled cell was demonstrated with the metamaterial acting as an optical readout of charge transfer, a capability which may enhance future point-of-care medical diagnostics.

Nanoscale conductive filaments may be formed and dissolved at specified spatial coordinates in an ion-conducting solid polymer electrolyte using a conductive atomic-force microscope (C-AFM). This C-AFM method was employed to gather statistics of filament formation and dissolution times, granting insight into the kinetics of ion transport within the electrolyte. Experimentation and simulation showed that nanoparticles, otherwise electrically inaccessible within the electrolyte, act as bipolar electrodes and influence filament behavior within a large area of the electrolyte. Fabrication of self-assembled nanoparticle stacks was demonstrated by a novel nanopore templating method and used with an auto-aligned C-AFM program to form filaments through stacks of nanoparticles. Unexpected behavior in formation/dissolution time as well as filament morphology suggests exceptionally altered ion transport behavior in confined electrolytes. This technique provides valuable examination of ionic whole-system behavior, indicating avenues for future research with similar systems such as batteries, resistive memory, and ionic membranes.

Nanoelectrochemistry thus provides a valuable glimpse into the underlying principles and kinetics that govern electrochemical systems, as well as promising capabilities in the nanofabrication of optical metamaterials and advanced devices.