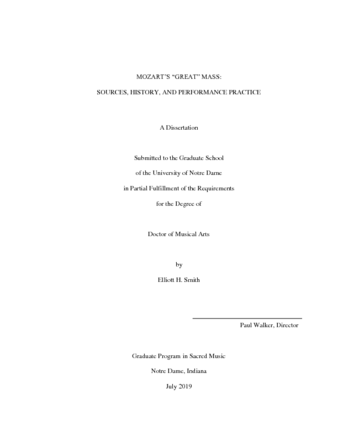 Mozart’s “Great” Mass in C minor, K. 427 emerged during a great period of transitions. Its date of composition, 1782/3 places it toward the end of the Enlightenment, between the American and French Revolutions, within the early years of Josephinism, and within the early years of the Industrial Revolution. Its date further places it in the midst of sweeping changes in the development of musical instruments and the orchestra. This thesis not only aims to frame this work within its historical context, but it also investigates what the first presumed performance may have looked like based upon documentary evidence, primarily musician rosters from Salzburg and Vienna including the roster from Mozart’s 1789 performance of his version of Handel’s Messiah. Further, this thesis examines the work’s orchestration and its expressive devices such as tempo and dynamics and studies them from the mindset of the Classical Era musician using the writings of eighteenth and nineteenth century writers such as Leopold Mozart, Daniel Gottlieb Türk, and Heinrich Koch coupled with the writings of modern scholars and performers such as Leonard Ratner and Robin Stowell. This paper’s ultimate purpose is to aid the modern conductor by presenting a well-rounded view of the work, its sources, and its performance history, as well as by offering performance suggestions.