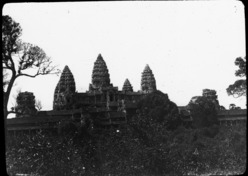 The inner towers are surrounded by rectangles of galleries; at the left and the right of center entry towers (gopura) are visible.