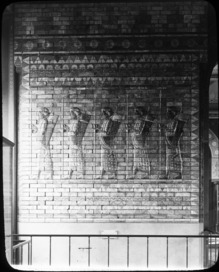 Excavations led by the French archaeologist Marcel Dieulafoy at Susa, in Iran, yielded a number of important discoveries, which were put on display in new rooms at the museum in 1888. The Frieze of Archers (AOD 488) is Achaemenid Persian Period, reign of Darius I, ca. 510 BCE.

The building of the Louvre in its present form was begun in 1546 by François I, who also founded the royal collections, acquiring works by Leonardo, Raphael, and Titian. The modern Palais du Louvre comprises a square courtyard, the Cour Carrée, to the west of which project two wings. The north wing, the Galerie Napoléon, runs along the Rue de Rivoli, while the south wing, the Galerie du Bord de l'Eau, fronts the River Seine. After 1639, Jacques Le Mercier doubled the size of the west wing and added the enormous Pavillon de l'Horloge with cumbersome decorations. In April 1667 Colbert commissioned designs for the east façade from a committee that included Louis Le Vau, Charles Le Brun and Claude Perrault. The Cour Carrée was completed under the First Empire, between 1801 and 1810. The grand design was completed under Napoleon III, who decreed on 12 March 1852 that the Louvre should be completed within five years. Louis Tullius Joachim Visconti and later Hector-Martin Lefuel constructed two parallel buildings, on either side of the Cour du Carrousel.