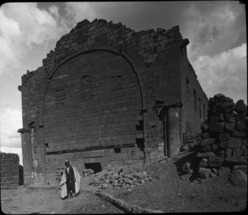 Bosra became a Christian bishopric early in the 4th century (and through the Late Byzantine period) and ruins of two early churches can still be seen today. It was captured by the Muslim Arabs in AD 635. About 30 meters to the north of the cathedral is a 3rd or 4th century basilica whose walls are intact up to roof level. This is the site of the famous encounter between Bahira and Muhammad. Bahira (known as Sergius the Monk in the Latin West) was a Nestorian (or Arian) Christian monk who is said to have met the Prophet Muhammad when he was 12 years of age. He noticed the seal of prophecy and foretold that the Prophet would have a great future.