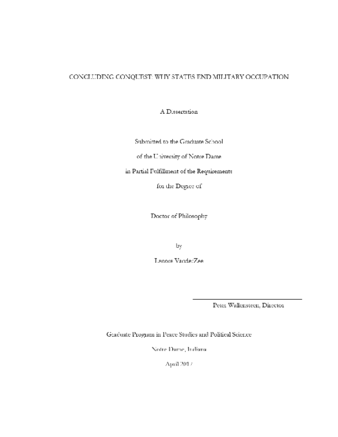 Military occupation has been part of interstate relations the system existed. Conquest paid, and controlling territory meant reaping its benefits. However, after World War II norms of state sovereignty and territorial integrity were codified in the United Nations Charter. At the same time, maintaining colonization became untenable and politically harmful, and Western states began to relinquish their colonies overseas, either by force or choice. Despite these emerging norms and the process of decolonization, military occupation continues to be an important international issue. There have been forty-two occupations that have begun since the end of World War II; of these, thirteen remain ongoing, and twenty-nine have ended. This project asks: Why do some of these occupations endure, while others end? Specifically, Why and how do states end military occupation? I theorize that the interaction between conditions at the international, dyadic, and domestic levels of analysis significantly shift the cost-benefit analysis of occupying states.

There has been very little comparative work on the processes of military occupation – the studies are limited to a handful of books and articles that do not directly address the question at hand, or have a coherent and logical definition of military occupation from which to build. To fill this gap, I created an original dataset identifying forty-two military occupations, 1945-2014 and collecting data on 32 variables. Using this data, I build my theory and develop hypotheses using diverse literatures, including territorial disputes, inter- and intrastate wars, failing states and falling empires, the demise of colonialism, and case studies of the individual cases of military occupation. By examining these varying branches of literature, I rule out potential competing explanations, as well as make some cautious generalizations about the nature of the end and outcome of military occupation.

I then test my theory by analyzing two cases of military occupation that share several important similarities: Indonesia’s occupation of East Timor (1975-1999) and Morocco’s occupation of Western Sahara (1975-Present). Through comparative process-tracing, I ascertain how conditions at the three levels of analysis interact to result in these divergent outcomes.