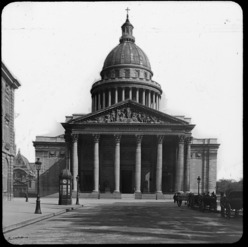 Early in 1755 Soufflot was appointed to provide plans for Ste Geneviève, the new church promised by Louis XV to house the reliquary of the city’s patron saint. A collection of drawings (Paris, Bib. N.) and Claude Boulleau’s engraving of 1764 show the building in its ‘ideal’ state in that year. Built partly over a crypt, where, for the first time, Soufflot used the Doric order of Paestum, it owes its grandeur to his use of the same colossal Corinthian order both inside and out. A heavy pediment emphasizes the dignity of the main entrance; this dominates the vast esplanade planned around the church. From 1791, following a Revolutionary decree, the church was altered into the Panthéon des Grands Hommes. Antoine Quatremère de Quincy had the buttresses demolished and, more crucially, the lower windows blocked up; this radically altered the lighting effects Soufflot had sought to achieve. Having removed the religious sculpture, Quatremère supplied a new programme for decorating the pediments (finally executed by David d'Angers in 1837). [Among those buried in its necropolis are Toussaint Louverture, Voltaire, Rousseau, Marat, Victor Hugo, Émile Zola, Jean Moulin, Marie Sklodowska-Curie, Louis Braille, Jean Jaurès and Soufflot, its architect.]