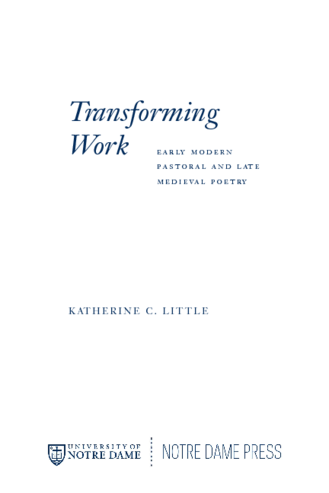 Pastoral poetry has long been considered a signature Renaissance mode: originating in late sixteenth-century England via a rediscovery of classical texts, it is concerned with self-fashioning and celebrating the court. But, as Katherine C. Little demonstrates in Transforming Work: Early Modern Pastoral and Medieval Poetry, the pastoral mode is in fact indebted to medieval representations of rural labor.

Little offers a new literary history for the pastoral, arguing that the authors of the first English pastorals used rural laborers familiar from medieval texts-plowmen and shepherds-to reflect on the social, economic, and religious disruptions of the sixteenth century. In medieval writing, these figures were particularly associated with the reform of the individual and the social world: their work also stood for the penance and good works required of Christians, the care of the flock required of priests, and the obligations of all people to work within their social class. By the sixteenth century, this reformism had taken on a dangerous set of associations-with radical Protestantism, peasants’ revolts, and complaints about agrarian capitalism. Pastoral poetry rewrites and empties out this radical potential, making the countryside safe to write about again.

Moving from William Langland’s Piers Plowman and the medieval shepherd plays, through the Piers Plowman-tradition, to Edmund Spenser’s pastorals, Little’s reconstructed literary genealogy discovers the “other” past of pastoral in the medieval and Reformation traditions of “writing rural labor.”