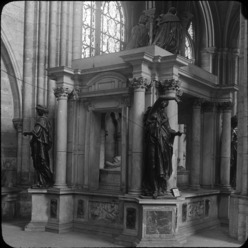 Of the vast collection of sculptures planned for this work and entrusted by Primaticcio to Germain Pilon in 1560, the only pieces that have survived are this tomb (imperfectly reconstructed by Viollet-le-Duc). The tomb itself, completed in 1573, took the form of a temple guarded by four large figures representing the Cardinal Virtues, elegant works in bronze, executed in 1565 by Pilon and Jacquiot Ponce. Inside the temple lie the effigies, represented naked; while adhering to the tradition established in earlier tombs, Pilon nevertheless created an image of death that is at once poignant and serene. Above these figures, however, are two impressive bronze figures of the couple kneeling at prayer, which were commissioned in October 1567 from designs by Primaticcio and are extremely detailed and lifelike portraits.