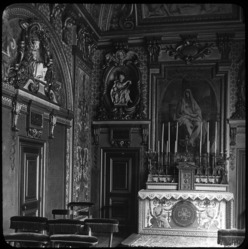 Located at the north end of the 25-hectare Jardin du Luxembourg. The commission for the Palais du Luxembourg (begun 1615), the most important of his career, was won by de Brosse in open competition. The site of the palace was originally on the outskirts of Paris, and it was conceived as a courtyard château. It was built of stone, and Queen Marie de Médicis’ wish for a building reminiscent of her former home, the Palazzo Pitti in Florence, was fulfilled by de Brosse in the rustication of the whole building and the incorporation of certain details from Bartolomeo Ammanati’s elevations at the Palazzo Pitti. To the west of the Luxembourg Palace, and communicating with it through interior courts, the sixteenth-century original hôtel of the Duc de Piney-Luxembourg was rebuilt during the same years, the smaller palace now called the Petit-Luxembourg.