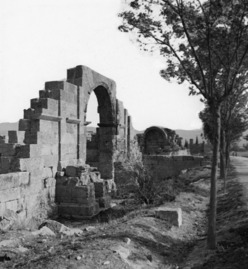 From the time of the synod of Carthage in 256 there was a Christian community and a bishop in Thevestis. Funeral epitaphs attest to Vandal occupation in the second half of the 5th century. After the Byzantine reconquest of North Africa in 533, however, the town gained in military importance and became a marketing centre. The Christian complex that was established (ca. 400) in a pagan necropolis to the north of the town walls is the most impressive surviving example of Early Christian architecture in Algeria. The complex was enclosed, had avenues and included a basilica, arches, fountains, gardens and other structures.