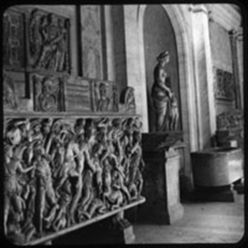 The Rotunda Room of the Vatican Museum, built by Michelangelo Simonetti during the pontificate of Pope Pius VI in the late 18th century, is modeled after the Pantheon, including an oculus in the ceiling and decorative rosettes in each of the niches in the dome.The floor is made up of intricately designed mosaics from around the 2nd century, having been used to decorate an ancient Roman villa. The walls carry a series of niches for displaying colossal statues, between which are half-columns which support outsize busts. At the center of the room is a huge red porphyry basin.