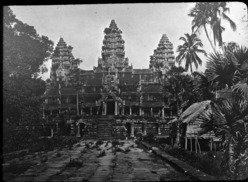 The temple mountain form was meant to represent Mount Meru. The five towers are arrayed in quincunx form; four at the corners and one in the center.