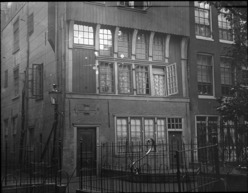 The Begijnhof is one of the oldest inner courts in the city of Amsterdam. A group of historic buildings, mostly private dwellings, center on it. As the name suggests, it was originally a Béguinage. After the Alteration (Protestant takeover) of 1578, when Amsterdam came under Calvinist rule, the Begijnhof was the only Roman Catholic institution to be allowed to remain in existence. This was because the houses were the beguines’ private property. The Chapel, however, was closed and lay empty for around 30 years before being ceded to the English Presbyterians. The ancient, restored wooden house (Houten Huys or Huis) is famous as one of the two wooden houses still existing in the center of Amsterdam and dates from about 1528, the oldest wooden house in Amsterdam. The last beguine died in 1971.