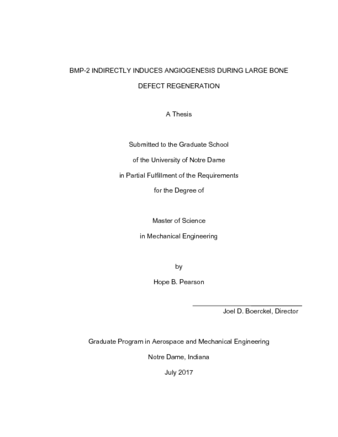 Critical-sized bone defects that do not heal without intervention have prolonged morbidity and are extremely costly 1,2 Additionally, their repair is often limited by insufficient neovascularization 2. Bone morphogenetic protein-2 (BMP-2) is used clinically to treat such defects and it has been proposed that BMP-2 is capable of directly inducing angiogenesis by signaling through endothelial cells 3. In addition, thrombopoietin (TPO) has been shown to stimulate bone healing through osteoblast activation by megakaryocytes,2 and has been implicated in angiogenesis. We hypothesized that BMP-2 and TPO delivery would enhance vascularized regeneration of critical-sized bone defects compared to treatment with scaffold alone.

Bilateral 8mm defects in rat femora were treated with a collagen sponge hydrated with either PBS, 5μg of BMP-2, 5μg of TPO, or 25μg of TPO. Neovascularization was evaluated by contrast-enhanced microCT angiography at weeks 3 and 8. Bone formation was measured post-mortem at 3 weeks and in vivo at 4 and 8 weeks. To determine whether the angiogenic response to growth factor stimulation was a direct effect of endothelial cell activation or a paracrine effect induced by bone formation, we treated endothelial colony forming cells (ECFCs) with BMP-2, TPO, or hMSC conditioned media and evaluated migration, tubulogenesis, and SMAD 1/5/9 nuclear localization in vitro. We also implanted hydrogels with ECFCs and/or BMP-2 subcutaneously into rats and observed bone and vessel formation in an extraosseous site.

In vivo, BMP-2 significantly induced bone formation and neovascularization, but TPO treatment did not significantly affect either. Studies have observed significant effects of TPO delivery on bone regeneration, suggesting limitations of the collagen sponge delivery method or need for medullary reaming to promote megakaryocyte mobilization. BMP-2 and TPO had no significant effect on in vitro ECFC migration or tubulogenesis, but BMP-2 supplementation increased SMAD nuclear localization, confirming endothelial cells are responsive to BMP-2. Additionally, ECFCs were responsive to hMSC conditioned media. Subcutaneous delivery of BMP-2 and ECFCs did not have a significant effect on neovascularization. These data suggest that the effect of BMP-2 on angiogenesis is secondary to bone formation-induced vascular recruitment rather than direct endothelial cell activation.