Development of High Speed Nanoscale Sensors Based on Single-Electron Devices 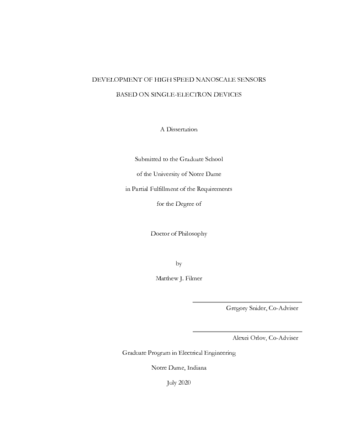 Radio frequency (RF) reflectometry is a well understood measurement technique in common use by RF engineers today. This technique has been applied at low temperature to probe the impedance of nanoscale devices for over two decades. These measurements typically employ basic resonant impedance transformers to bring the device impedance close to the characteristic impedance of the measurement apparatus. In 2013 it was discovered by Colless et al. that reflectometry could be used to measure extremely small impedance changes in a gate coupled to a quantum dot to directly probe the charge state of the dot. This has simplified measurements of certain nanoscale devices including single electron boxes (SEBs) and semiconductor qubits. Despite the maturity of RF reflectometry measurements in general, researchers working at low temperature continue to make basic mistakes in their measurements. The root cause of most of these mistakes is the failure to properly calibrate the measurement apparatus. In some cases this leads researchers to unrealistic conclusions when trying to match measurements to theory. This dissertation demonstrates that a low temperature RF calibration can be very easy and straightforward using inexpensive, off the shelf SMA terminators as calibration standards. A proper calibration allows for direct quantitative comparisons between data measured on different reflectometers or between data and simulations. The consistency between measurements and simulations then allows for straightforward design and implementation of improved impedance transformers, increasing the SNR of extremely sensitive measurements, with simple data-based simulations. A new type of single electron device, the capacitively coupled RF single electron transistor (CSET) is proposed and demonstrated which can rival the traditional RF SET in sensitivity but integrates more effectively into arrays and may offer a level of resistance to electrostatic discharge damage.