Bourbon Royal Palace of Caserta: Garden detail, the Diana and Actaeon Fountain at the foot of the Grand Cascade 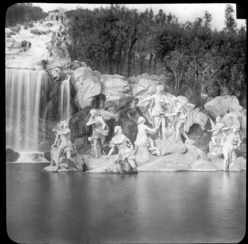 The system by which water is conveyed to the park (1753-1769) is one of the greatest technical achievements of the 18th century; 42 km long, it includes a spectacular aqueduct, the Archi della Valle, of antique proportions (528 m length x 60 m height).

Constructed for the Bourbon kings of Naples. It was the largest palace and one of the largest buildings erected in Europe during the 18th century, “the swan song of the Baroque period.” The Bourbon king Charles VII of Naples (from 1759 King Charles III of Spain) decided to make Caserta the site of a royal residence in imitation of Versailles. During the 1780s such artists as Fidele Fischetti and Domenico Mondo produced frescoes for various rooms. It was not fully furnished until the mid-19th century. Charles of Bourbon never lived in it; his son Ferdinand IV did so only occasionally, and it only fulfilled its intended purpose as a royal residence for the Bourbons between 1830 and 1860. The formal gardens were laid out by Martin Biancour under Vanvitelli’s supervision. The dominating axis is about 3 km long from the palace entrance to the waterfall at the end of the park. A broad stretch of water, the canalone, with large fountains, occupies the length of the vista which ends at the great cascade at the foot of the mountain.