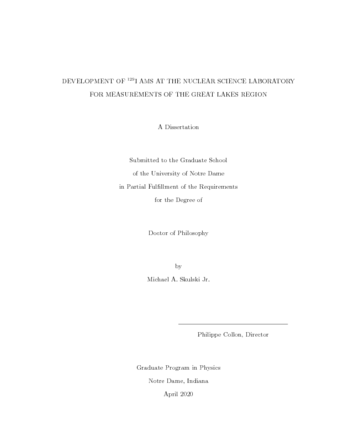 The radionuclide 129I, with a half-life of 15.7×10^6 years, is naturally produced on Earth through cosmic-ray-induced reactions on xenon in the atmosphere and spontaneous fission of uranium. The natural production is significantly less than the amount that has been released by the reprocessing of spent nuclear fuel. 129I can move efficiently through the environment, and because it has an effectively point-like release from nuclear fuel reprocessing centers, 129I represents a potentially powerful environmental tracer. For this ability to be realized, the distribution of 129I in the environment needs to be measured - previous measurements have focused on reprocessing centers and nuclear disaster sites, leaving large areas unmeasured. This inspired the Collon group to contribute data on 129I content in the Great Lakes region, measured by Accelerator Mass Spectrometry using the time-of-flight method. Two MCP detectors were used to obtain adequate timing resolution for discrimination against 127I, the primary contaminant in 129I measurement. Samples were collected throughout Michigan and measured for their 129I content. Following the measurement, potential methods for improving the AMS system for 129I measurement were identified for future development, both in terms of sample preparation and technical developments that can improve the ease and consistency of an 129I measurement.