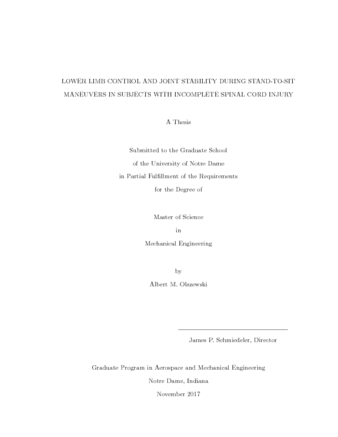 Downhill treadmill training aims to rehabilitate eccentric motor control in subjects with incomplete spinal cord injury (ISCI). The purpose of this study was to characterize lower limb control deficits in kinetic, kinematic, and EMG characteristics of subjects with ISCI performing stand-to-sit maneuvers. Observations of body weight supported (BWS) downhill treadmill training effects were made through examination of vertical ground reaction force (vGRF), valgus knee characteristics, and EMG signals of individuals with ISCI. Results from this study can be used to validate and further develop experimental techniques of ISCI rehabilitation.

Analysis from this study showed that un-exercised subjects with ISCI appear to have less control over their center-of-mass (COM) velocity during stand-to-sit. Deceleration phase duration was shorter in un-exercised subjects than in healthy control subjects. Some training subjects exhibited a decrease in deceleration phase duration after completing downhill training, but most subjects appeared to be unaffected. It is possible that subject need a longer time to recover from training before a rested data collection can be made. The majority of subjects with ISCI exhibited symmetrical vGRF. Downhill training did not have any effect on subjects with asymmetrical vGRF. Abnormal vGRF characteristics could be a result of injury location and severity.

Statistically significant deficits in valgus moments and angles were found in subjects with ISCI. Valgus moment values were not significantly affected by downhill training, but more subjects exhibited negative training effects in a longitudinal study. Unhealthy valgus characteristics can be caused by strengthening the quadriceps and GMed without simultaneous strengthening of the hamstrings and GMax. It is possible that downhill training does increase leg muscle strength, but not in all muscles necessary for lower limb control and stability.

Un-exercised subjects have significantly lower peak EMG signals than healthy subjects. In a longitudinal study, some training subjects exhibited healthy EMG characteristics in muscles that act eccentrically during stand-to-sit after training. This suggests that downhill training does aid in the rehabilitation of eccentric motor control of some subjects with ISCI.