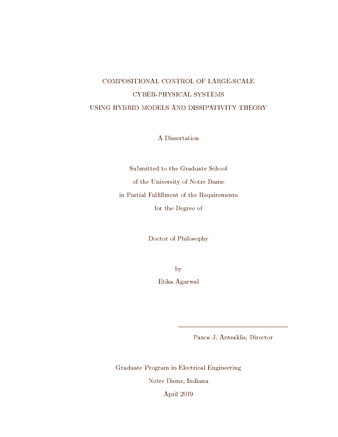 This dissertation presents novel results on the scalable control of cyber-physical systems (CPS) that comprise of many dynamically coupled subsystems interconnected to form a large-scale system. Modern-day infrastructure systems such as smart transportation, power grid and renewable energy, a fleet of industrial robots, and smart cities, are some examples of CPS, where the network of dynamical systems is capable of expansion, contraction, and reconfiguration. It is therefore essential to develop computationally efficient design tools to guarantee control performances of a dynamically growing network, without having to re-design the existing subsystems.

Towards this goal, we begin by developing dissipativity based control designs for hybrid systems which act as basic building blocks for modeling CPS. Since dissipativity is closely related to stability, and, under mild conditions, invariant over specific interconnection structures, dissipativity based control designs offer the possibility of a framework scalable to large-scale networks. However, if there is a communication delay between the systems, then the feedback system may not be dissipative. We propose a linear transformation of the information exchanged between the hybrid systems to guarantee specific dissipativity properties of the feedback interconnection in the presence of unknown communication delays. If the hybrid systems are not already dissipative, we propose new techniques to design state and output feedback controllers guaranteeing the dissipativity of the closed loop system. We use these methods to establish the dissipativity of a network of dynamically coupled subsystems, and further reduce the communication overhead by designing distributed controllers. These distributed controllers use only the local information available from the subsystems and their neighbors to compute the control actions. The dissipativity based design methods discussed so far facilitate the compositionality of networks with feedback and parallel interconnection topologies where new subsystems with locally designed controllers can be connected to a dissipative networked system without disturbing the dissipativity of the network. In the concluding chapters of this dissertation, we propose a solution to the open problem of making the synthesis of distributed subsystem-level controllers compositional for networked systems with no restrictions on interconnection topology.

Throughout this dissertation, we use the example of power networks modeled as CPS to demonstrate the applicability of our results. We show that the proposed control design approaches can guarantee the stability, robustness, and reliability of microgrids and their networks in presence of disturbances in power requirement, measurement loss, and changes in the scale and topology of the network.