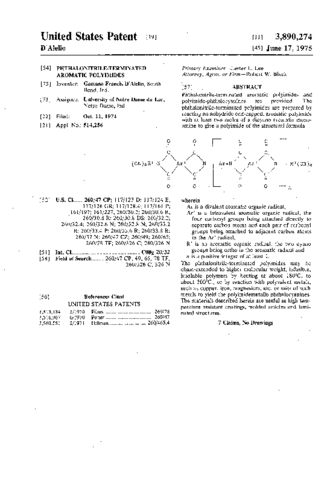 Phthalonitrile-terminated aromatic polyimides and polyimide-phthalocyanines are provided. The phthalonitrile-terminated polyimides are prepared by reacting an anhydride end-capped, aromatic polyimide with at least two moles of a dicyano aromatic monoamine to give a polyimide of the structural formula: ##SPC1## Wherein Ar is a divalent aromatic organic radical, Ar’ is a tetravalent aromatic organic radical, the four carbonyl groups being attached directly to separate carbon atoms and each pair of carbonyl groups being attached to adjacent carbon atoms in the Ar’ radical, R’ is an aromatic organic radical, the two cyano groups being ortho in the aromatic radical and n is a positive integer of at least 1. The phthalonitrile-terminated polyimides may be chain-extended to higher molecular weight, infusible, insoluble polymers by heating at about 180.degree.C. to about 300.degree.C., or by reaction with polyvalent metals, such as copper, iron, magnesium, etc. or salts of such metals to yield the polyimidemetallo phthalocyanines. The materials described herein are useful as high temperature resistant coatings, molded articles and laminated structures.