Foucault against Ethics: Subjectivity and Critique after Humanism 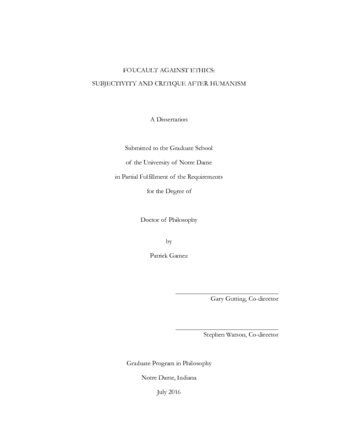 This dissertation is in the first place an interpretation of the thought of Michel Foucault. Beyond interpretation, it also makes provides a qualified defense of his views on the significance of ethical theory, particularly in its “critical” forms, the shape of the space of reasons, and the role of subjectivity within it.

I take as my starting point an orthodox view of Foucault’s work, namely, that it can divided in terms of its content into three distinct periods. First, an “archaeological” phase spanning most of the 1960s. Second, a “genealogical” devoted to unearthing power-relations beneath purportedly progressive institutions. Finally, an “ethical” period, focused on rehabilitating practices of moral self-formation in Antiquity. This so-called “ethical turn” has been a source of persistent criticism of Foucault’s thought for several decades.

I claim that this periodization is mistaken. There is no substantively “ethical” period in Foucault’s work that would stand in contrast to his genealogical inquiries. In the first chapter, I present overwhelming textual evidence against this interpretation, and then diagnose the motivation for it: the charge of “ethical nihilism” and the demand for a normative framework from critics of Foucault’s genealogical works. In brief the charge is that in revealing the power-relations that partially constitute Enlightenment institutions and the ideals that sustain them, Foucault deprives himself of the resources required to construct the kind of ethical theory needed to ground his critical project.

In the second chapter and third chapters, I bring Foucault into conversation with several figures in analytic philosophy, most prominently Wilfrid Sellars and the “Pittsburgh School,” and P.F. Strawson. I argue that Foucault’s archaeological and genealogical works are best construed as an historical inquiry into the construction of “spaces of reasons,” in which we find ourselves subject to normative evaluation and direction. I then argue that the charge of nihilism against Foucault is the result of a process of neutralizing and depoliticizing the essentially plural, agonistic character of the space of reasons. I conclude by using my interpretation to explain and defend Foucault’s controversial engagement with the Iranian Revolution.