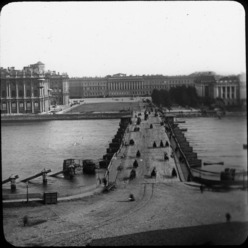 Lantern slide labeled Petrograd. Palace Square (Russian: Dvortsovaya Ploshchad), connecting Nevsky Prospekt with Palace Bridge leading to Vasilievsky Island, is the central city square of St. Petersburg and of the former Russian Empire. It was the setting of many events of worldwide significance, including the Bloody Sunday (1905) and the October Revolution of 1917.

The official seat of the government of Russia from 1712 to 1917, it is sited on the left bank of the River Neva, east of the Admiralty, and is now part of the Hermitage Museum. There have been four successive palaces on the site, the first two of wood and destroyed by fire. Bartolomeo Carlo Rastrelli and Bartolomeo Francesco Rastrelli built the new, stone, Third Winter Palace (1732-1736) for Empress Anne (reigned 1730-1740). Anne’s palace was demolished and its foundations used as the base for the west wing of the new (fourth) palace. In 1754 Bartolomeo Francesco Rastrelli began building the Fourth Winter Palace for Empress Elizabeth (reigned 1741-1761), also in stone. Rastrelli, who was assisted by Yury Fel'ten, finished the present, Fourth Winter Palace in 1762. Four massive three-storey ranges linked by broad galleries surround a courtyard. Each façade is individual, but the principal ones are on the north and south. In the northern part, facing the Neva, are the staterooms and the ceremonial staircase, originally called the Posol'skaya or Ambassadorial Staircase. The south side faces the square and the city; a three-arched gateway leads into the courtyard. The interior was rebuilt after a fire in 1837 with some efforts at restoration and the rest as new decoration.