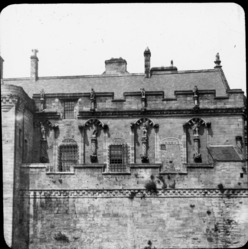 The architecture is French-inspired Renaissance, but the decoration is German in inspiration,and sources for the statues have been found in the work of the German engraver Hans Burgkmair, carried out by Scottish masons.

Castle in Central region, Scotland. It was built overlooking the River Forth at a strategically important junction of routes by both land and water, where there was the additional advantage of a high volcanic outcrop as a natural setting for the royal castle required to defend these routes. The first references to a castle are from the reign of Alexander I (reigned 1107-1124), who is known to have built a chapel there. The oldest extant building is the North Gate from ca. 1381. Architecturally the castle reached its apogee during the reigns of James IV (reigned 1488-1513), James V (reigned 1513-1542) and James VI (reigned 1576-1625). The Royal Palace was completed ca. 1542.