Insights from Mathematical Modeling on the Natural History, Dynamics, and Control of Dengue 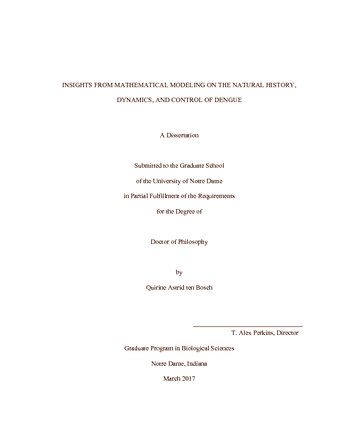 Dengue poses an increasing threat to about half of the world’s population. In this dissertation, I present four mathematical modeling exercises aimed at improving understanding of the natural history, dynamics, and control of dengue viruses (DENV) and the mosquitoes that transmit them.

First, I present a quantitative analysis of how DENV-infected individuals across the spectrum of disease outcomes contribute to transmission. Using a suite of models, I parsed available data on viremia dynamics within humans, human infectiousness to mosquitoes, and demographic projections of the infectious reservoir. I found that individuals with inapparent or no symptoms whatsoever—i.e., ‘silent’ infections—are likely the primary reservoir of DENV, which casts doubts on current practices for dengue control.

Second, to examine what mechanisms govern temporal patterns characteristic of dengue epidemiology, I compared alternative models with differing assumptions about serotype-immune interactions and seasonal forcing. I found that, when assuming that primary and secondary infections constitute the infectious reservoir, all models were capable of reproducing real-world dengue dynamics. When post-secondary infections were assumed to contribute to transmission, cross-immunity was found to be the most important factor for reproducing patterns characteristic of dengue dynamics. The competing hypothesis of cross-enhancement had limited support.

Third, I present a new modeling tool to parse data from mark-release-recapture studies. A Markov chain model fitted to data using Bayesian techniques was used to estimate the effect of a volatile vector control product on Aedes aegypti in an experimental hut design. I inferred concurrent product effects on unobserved processes such as mosquito repellency, which could potentially impact transmission by reducing human-mosquito contacts.

Fourth, I introduce a modeling framework to examine how different modes of action of vector control products act in symphony to effect epidemiological outcomes. I used the estimates from the experimental hut studies and additional laboratory experiments to parameterize this framework and showed that, whereas toxic effects are the most effective in reducing transmission, products that reduce human-mosquito contacts through repellency or irritancy can have a considerable impact on transmission, as well. Such spatial repellent products could augment available control tools, in particular in areas with emerging insecticide resistance.